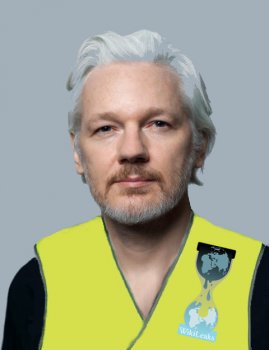 Julian Assange called YanisVaroufakis. Here is what they talked about

Last night, immediately after our first DiEM25 TV event, my phone rang. It was Julian. From prison. It was not that first time that he honoured me deeply by using the few phone calls prison allows him to make to call me. Like every other such occasion, when I unexpectedly recognise his voice a torrent of emotions comes flooding in. Guilt, primarily, at the thought that, the moment the line is disconnected, he will remain there – in the exceedingly dark place to which he has been confined because of a decision he made long ago to help the rest of us grasp what the powers-that-be have been doing on our behalf without our knowledge or consent.

Julian wanted to talk about the effects of Covid-19 on the world we live in and, of course, on his case. He remarked that Jeremy Corbyn’s election manifesto, that the establishment had lambasted for being too radical, now seems unreasonable moderate. We laughed at the audacity of those who were telling the people of Britain that it was irresponsible to spend a few tens billions on providing proper funding to the NHS and social care for all, on turning broadband into a public utility, and on taking the railways into public ownership to make them work properly – the very same people who, now that big business and capitalism more generally, are in serious trouble seem to have discovered the money tree, announcing trillions to be pumped into the economy. Julian did not know (how could he, when the prison authorities deny him access to newspapers, the internet, even to BBC Radio 4?) that Boris Johnson had, earlier yesterday, announced the temporary nationalisation of the railways – seeing that privateers can never provide a decent service in the midst of a national emergency.

After a few minutes during which we allowed ourselves to bask in the neoliberals’ Waterloo, in the hands of some RNA that the system could simply not cope with without abandoning all its certainties, we discussed what this means for the future. Julian said, quite correctly, that this new phase of the crisis is, at the very least, making it clear to us that anything goes – that everything is now possible. To which I added that anything ranges from the best to the worst possible developments. Whether the epidemic helps deliver the good or the most evil society will depend, of course, on us – on whether progressives manage to band together. For if we do not, just like in 2008 we did not, the bankers, the spivs, the oligarchs and the neofascists will prove, again, that they are the ones who know how not to let a good crisis go to waste.

Will we succeed? Julian had a hopeful comment on this: At the very least, transnational organisations like Wikileaks and DiEM25 had honed the digital tools for online debates and campaigns well before Covid-19 came on the scene. In some measure, we are better prepared than others.

Then we talked about his case. His prison conditions are deteriorating. Now that visits have stopped, his isolation is getting worse. His lawyers are about to petition the court for bail. If any prisoner’s health at Belmarsh High Security prison is in jeopardy from Covid-19 infection, it is Julian’s. Will the court grant him bail? Unlikely. Will the new crisis change the odds of his extradition? We agreed that the answer to the last question is: probably, but only a little – now that the national security complex in the US and in the UK have things to worry about that did not feature a few weeks ago.

Our conversation lasted ten minutes and one second. Then the prison warden cut the line. The one man who knows the perils and pains of isolation better than all of us, had emerged from it to give me, us, a ten-minute lesson in how not to lose it while in confinement.

Make no mistake dear reader: Julian is struggling to keep his faculties, not to lose his mind. For hours every day in solitary he fights the darkness and the despair. When he sounds lucid, funny even, on the phone it is so because he has worked for 20 hours in anticipation of the moment when he will have to communicate his side of the story, his thoughts, to the outside world. No one should have to live that way.

And so it is that, now that we are all in some state of isolation, Julian’s plight – as well as insights – must give us pause, and cause, to discover in ourselves the power, and the solidarity, necessary to ensure that this crisis is not wasted – that the inane and corrupt powers-that-be do not end up, once again, the beneficiaries.