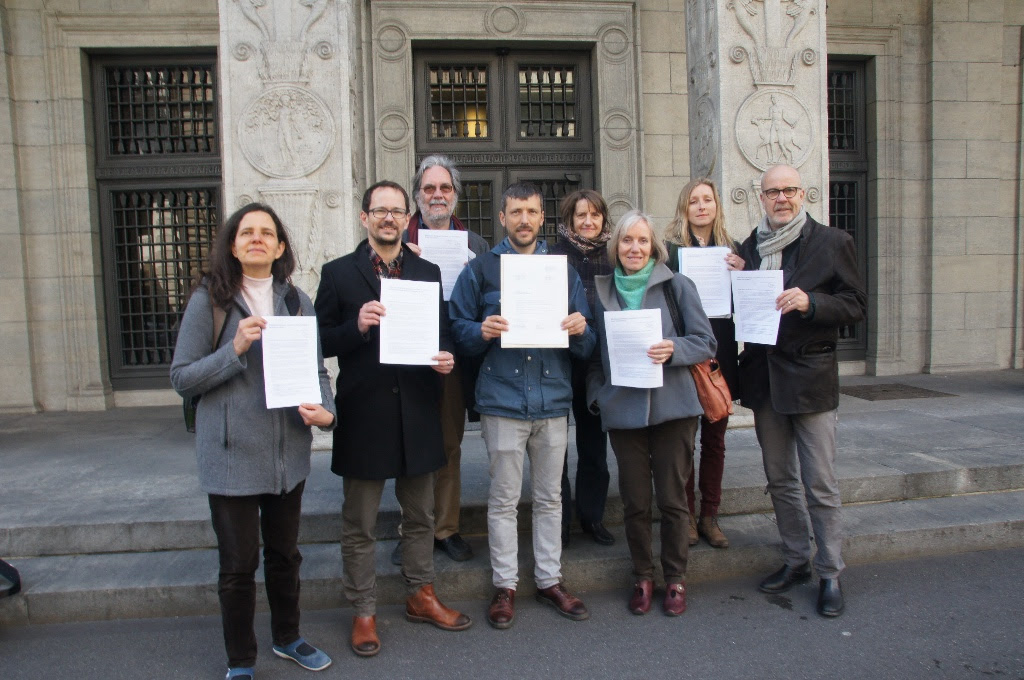 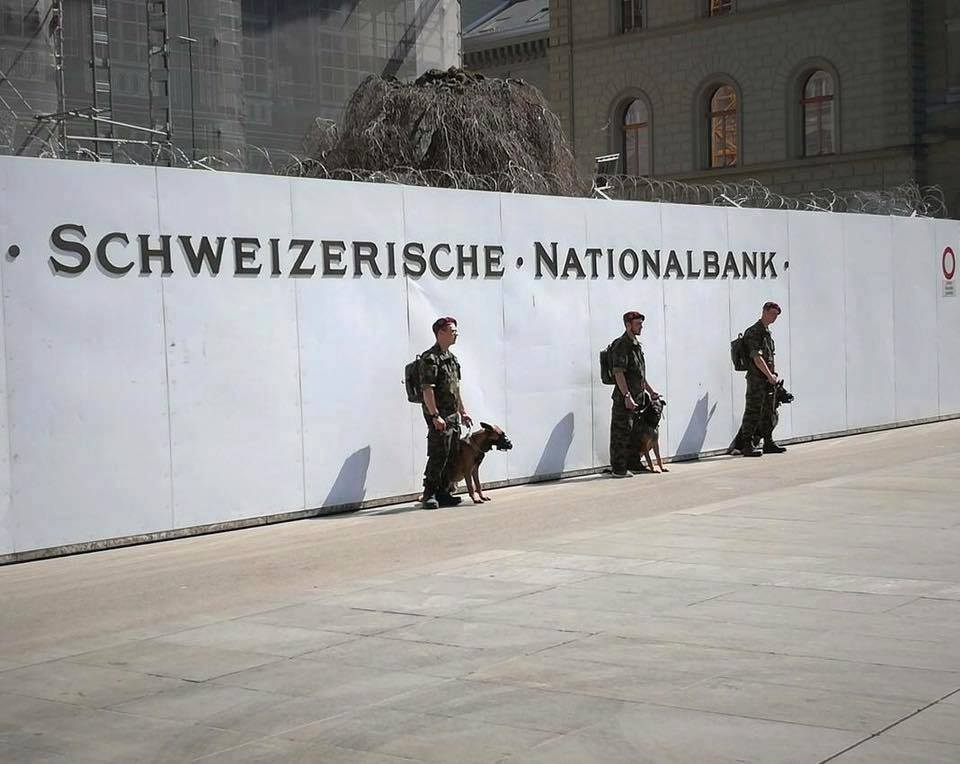 First it was an octogenarian graffiti artist. Now it’s a group of environmentalists.

An 86-year-old woman has been arrested in Bern for spray painting an anti-war message on a billboard surrounding the Swiss National Bank, reported news agencies.

Louise Schneider poses for media after spraying the words ‘Money for Weapons Kills’ on a wall of the Swiss National Bank in Bern, Switzerland, on April 11.

Graffiti Just the Beginning for the SNB as Activists Pounce 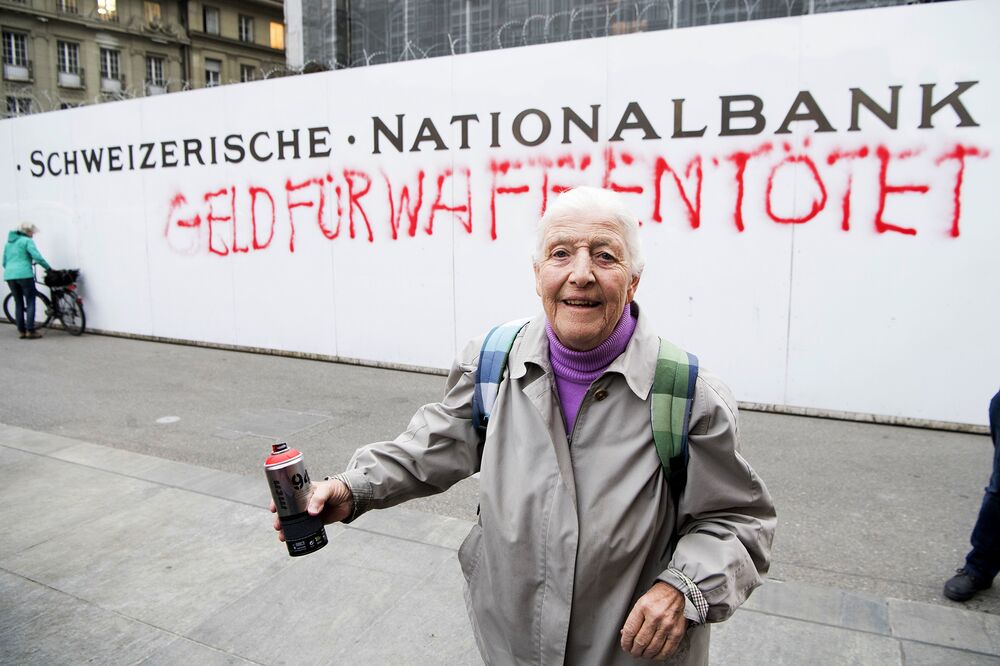 L
First it was an octogenarian graffiti artist. Now it’s a group of environmentalists.
Switzerland’s central bank has come through plenty of battles about currency ceilings, negative interest rates and market interventions in recent years. But its latest challenges are more novel, with a motley group of political activists pushing proposals on everything from ethical investing to removing one of the cornerstones of the financial system. 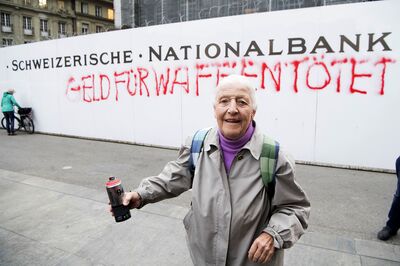 Octogenarian activist poses with spray can outside SNB.
Photographer: Anthony Anex/Keystone via AP Photos
On Thursday, the Swiss National Bank was presented with a letter in Zurich urging it to stop holding shares of fossil-fuel producers, days after an 86-year-old woman scrawled a slogan at its office in Bern to protest its investments in weapons firms. On top of that, its annual meeting next week will feature a least one speaker backing the Vollgeld initiative, which seeks to end the way banking has been conducted for centuries.
It’s not the first time that the SNB has come into the crosshairs of political campaigners. It saw off an unsuccessful bid in 2014 to force it to hold a fixed portion of its assets in gold and repeatedly has faced criticism for the ballooning of its balance sheet due to interventions.
While other central banks have also been targets — anti-austerity protests marred the opening of the European Central Bank’s new headquarters and a confetti-throwing activist disrupted a press conference in 2015 — Switzerland’s system of direct democracy means the SNB is in something of a unique position.
“If you look at the foreign-exchange interventions and its swollen balance sheet, the SNB is permanently more in the public eye,” said Alexander Koch, an economist at Raiffeisen Schweiz in Zurich and a shareholder in the central bank. “There seem to be more people thinking about how they could step in.” 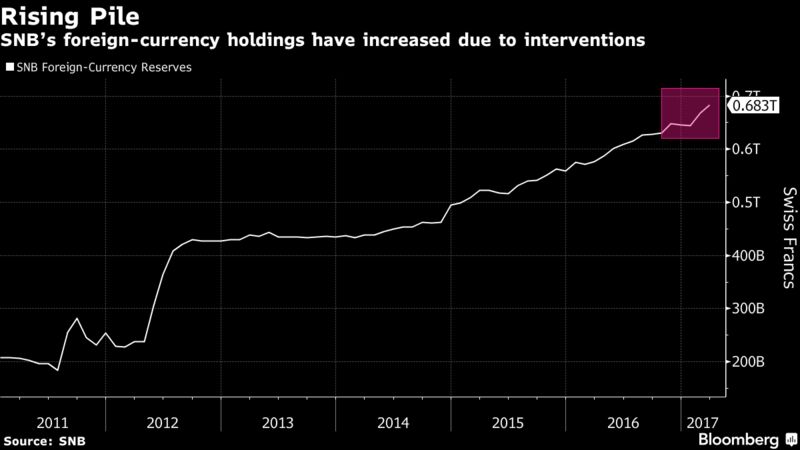 The fossil fuel letter was handed over by a group of half a dozen activists lead by Balthasar Glaettli, a lawmaker for the Greens. His party has submitted a parliamentary motion to get the SNB to divest non-renewable energy shares, he said, adding that this aims at making the central bank “serious about its divestments.”
The environmentalists have more in store: Christian Luethi of Klima-Allianz Schweiz, one of the organizations behind the letter, says his group has a permit for a peaceful demonstration in Bern on April 28, the day of the SNB’s shareholder meeting. Additionally, another group backing the letter has submitted a proposal for the AGM to ultimately ban SNB holdings in companies that harm the environment, violate human rights and produce internationally condemned weapons. The motion won’t be taken up at the meeting, according to the agenda.
“I can’t think of anything on a similar scale on the euro zone or in the U.K.,” said Jessica Hinds, an economist at Capital Economics in London.
While Switzerland’s use of plebiscites to amend its constitution, along with the SNB’s annual payout to the cantons, may make the central bank more sensitive, Hinds said it’s probably “very marginal.”
Twenty percent of the central bank’s foreign-exchange reserves are in equities, using a strategy mirroring broad-based indexes, though it excludes some companies on ethical grounds and banks to avoid possible conflicts of interest.
The campaign for a national ballot on the defense investments — kicked off with the graffiti protest last week — is only starting to collect the requisite 100,000 signatures, and a vote isn’t likely for a few years. 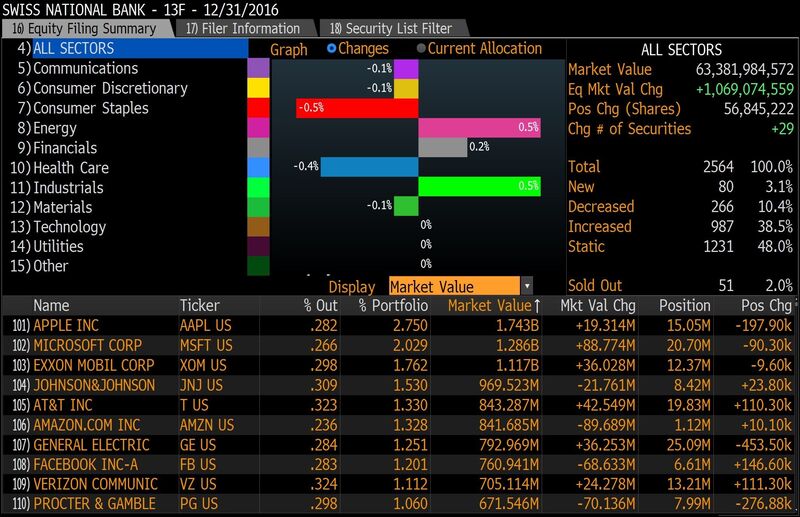 Source: SNB regulatory filing to the U.S. Securities and Exchange Commission
Before that — potentially in 2018 — there will be a plebiscite on the Vollgeld measure, which would effectively end fractional reserve banking by forbidding commercial banks from granting loans that aren’t fully backed by deposits.
Proponents already spoke at the 2016 AGM, helping to stretch it out past noon and delaying the free lunch and ice cream popular among attendees. The majority of the SNB’s shares are held by cantons and cantonal banks and there are also some 2,000 private investors, who receive a dividend but whose voting rights are extremely limited.
According to spokesman Raffael Wuethrich, Vollgeld representatives intend to make a showing again at next week’s meeting.
“We will step up to the lectern,” he said.

Before it’s here, it’s on the Bloomberg Terminal.