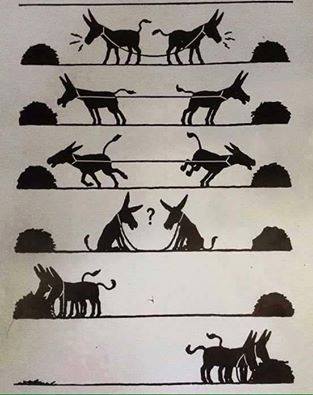 Here is a marvellous article which confirms the validity of the Social Credit thesis. I have posted the following comments but am not yet certain that they have been accepted.

Frankly, most of the comments on this article are totally irrational and the product of slave mentalities who seem to be utterly brainwashed into believing that the purpose of human life is to be slaving ever harder and faster on an upward tilting treadmill. Let us understand once and for all: The purpose of production is to deliver goods and services to society as when and where required of desired–at minimal cost and maximum efficiency with the least inconvenience to everyone. The purpose of economic activity is NOT to create work for humans but rather to generate adequacy of goods and services with increasing leisure. With displacement of human labour by automation, the problem of distribution is increasingly separated from earned incomes derived from engaging in “work”. How utterly mindless and stupid can humanity be? If we want work we can scrap our technology and or engage in increasingly pointless, wasteful and destructive activity such as endless war.

The existing price-system generates both incomes and costs or prices. Because of ever increasing allocated charges in respect of capital, which do not increase income in the same cycle of production, added to those of wages, salaries and dividends to make up total retail prices, final prices increasingly exceed earned incomes. The more we employ “tools” or physical capital relative to labour the bigger this chasm between effective consumer income and consumer prices becomes.

If nothing else intervened the economy would simply collapse because of an increasing lack of effective consumer purchasing-power. In a futile and irrational attempt to overcome this problem we rely on financing of consumption of current goods by financially mortgaging our future through increasing bank loans which create new money only as inflationary debt, by increasingly wasteful and destructive economic activity culminating in war, attempting to export more than we import (called strangely a “favourable balance of trade”) and producing non-consumer goods for increasing engagement in military conflict. Bankruptcies also are a factor in reducing obligations when economies stall because of an excess overhead of unsustainable bank debt. What a way to run an economy!

The new money created by debt and undesirable activity is obviously required because the consumer goods awaiting sale must be available to consumers as they emerge from the production line. The new money must not, however, be created as debt. The physical costs of production are fully met as production takes place and are fully met when goods are completed and ready for sale to consumers. There should be no overall macroeconomic need for consumer debt whatsoever. Consumers should always have sufficient aggregate income to purchase the entire output of industry as it flows off the production line.

The new consumptions credits should merely be deducted from a National Credit Account, being a continually updated actuarial determination of the nations real credit, i.e., all those available actual resources which if used might create prices. The new consumption credits must be paid from outside the existing price-system to make it continuously self-liquidating, i.e., able to liquidate all financial costs of production as they occur. These new credits should take the form of National (Consumer) Dividends payable by inalienable inheritance to all citizens and payment to all retail outlets enabling them to lower their final prices, i.e., to effect Compensated (Retail) Prices.

These issues were all dealt with exhaustively by the British engineer and theorist, Major Clifford Hugh Douglas whose ideas were known as Social Credit and which were spreading like wildfire during the inter-war years between 1918 and 1945 and thereafter into the post-war period. Those who wish to learn more about Douglas and realistic economics are referred, e.g., to: www.socred.org