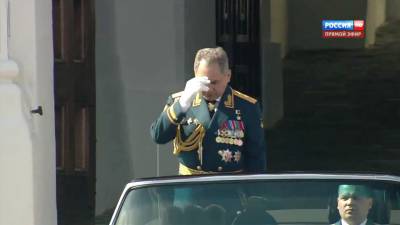 The third world war has begun, according to Pope Francis…
Today will go down in Russian history, as a truly historical celebration of the victory over Nazi Germany.  The parade – by far the most beautiful I have seen (alas, only on video, not in person) – was superb and for the first time included the Chinese PLA [People’s Liberation Army].  Clearly, we see history in the making.  But something else, no less amazing, also happened today: Defense Minister Shoigu made the sign of the Cross before the beginning of the celebrations:
This is an absolutely momentous moment for Russia.  Never in the past history had any Russian Minister of Defense done anything like it.  True, the old tradition was to make the sign of the Cross when passing under the Kremlin’s Savior Tower, if only because there is an icon of the Savior right over the gate.  However, everybody in Russia immediately understood that there was much more to this gesture than an external compliance to an ancient tradition.
The Russian journalist Victor Baranets puts it very well when he wrote:”At that moment I felt that with his simple gesture Shoigu brought all of Russia to his feet.  There was so much kindness, so much hope, so much of our Russian sense of the sacred [in this gesture]“.  He is absolutely correct.  To see this Tuvan Buddhist make the sign of the Cross in the Orthodox manner sent an electric shock through the Russian blogosphere: everybody felt that something amazing had happened.
For one thing, nobody in his right mind would suspect Shoigu of ever doing anything just “for show”.  The man has an immense capital of popularity and credibility in Russia and he has no need for political hypocrisy.  Furthermore, those who saw the footage will immediately see that Shoigu was very concentrated, very solemn, when he did this.  Personally, I believe that Shoigu quite literally asked for God’s help in one of the most dangerous moment in Russian history in which he, the Russian Minister of Defense, might be called to take momentous decisions from which the future of the planet might depend.
For centuries Russian soldiers have knelt and asked for God’s blessing, before going into battle and this is, I believe, what Shoigu did today.  He knows that 2015 will be the year of the big war between Russia and the Empire (even if, due to the presence of nuclear weapons on both sides, this war will remain 80% informational, 15% economic and 5% military)
Does that mean that Shoigu converted to Orthodoxy?  Not necessarily.  Buddhism is very accepting of other religions and I don’t see much of a contradiction here.  But the fact that the first Russian government official to begin the historical Victory Day parade by making the sign of the Cross and appealing for God’s help is a Buddhist, is, in itself, quite amazing (even if it shames his nominally “Orthodox” predecessors who never did so).
I can only imagine the horror, outrage and despair Shoigu’s gesture will trigger in the pro-Western Russian “liberal intelligentsia” and in the western capitals.  In placing himself and all of Russia in God’s hands, Shoigu declared a spiritual, cultural and civilizational war on the Empire.  And just for that, he will go down in history as one of Russia’s greatest men.
The Saker
http://russia-insider.com/en/society/something-truly-amazing-happened-v-day-parade/ri6696