What is the history of the Von Siebenthals? 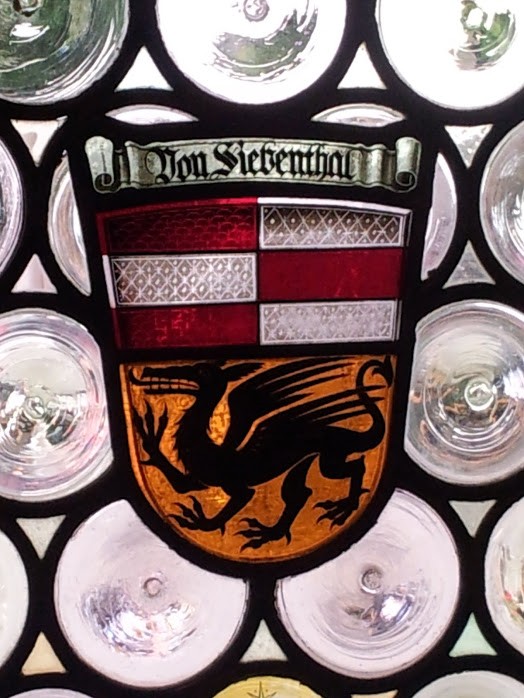 Our kingdom is inside us.
We gave our name to the place and the river.
von Siebenthal means the valley of the seven. Our ancestors chose this place as a shelter for our lineage.
There are seven valleys, seven springs
and our coat of arms has seven units, to keep the dragon, we all have inside us, under seven locks.
This dragon is the same of the island Bornholm, in the Baltic’s sea.
We are Burgunds, the first christians of Europe, converted by the son of the widow of Naïm, the first saint Materne, year 50 AC.
We are the roots of the valser’s civilisation, known under the name Walsers.

or Vauville: Leland gives the name twice as Waville. This family was a branch of the Barons of Briquebec (Wiffen, Histoire Russell, i. 6), and took its name from Vauville, near Valognes, where they had a castle. “Richard de Vauville appears in the ancient list of knights, who crossed over with the Conqueror.[102] The Vauville family had also possessions in Septvents, or Septvaus. The name of this place affords a curious example of the fact, that in the black-letter days, the old scribes could not always be certain of their own writing. One branch of the family read it as Sept vans, and gave seven vans, or winnowing vans, as their bearing: while another branch read the word as Sept vaus or de septem vallibus, and bore seven hieroglyphics which stood for valleys according to the conventionalism of the Heralds’ College.”—Sir Francis Palgrave. M. de Gerville, in his Anciens Chateaux de la Manche, states that they were Lords of Septvaus (near Caumont), and as we have already heard, they constantly bore the name—a name roughly handled by copyists, for “the corruptions of it exceed in number those of any other patronymic that we remember. In Latin, it is generally rendered Septemvannis, and sometimes Septemvallibus; but in Norman-French or English we find it written Setuans, Septvans, Septvaus, Seavaus, Sevanz, Sephans, Sevance, Sevaunces, Senantz, Cennants, and even Setwentz and Setwetz!”—J. R. Planche. He gives a detailed account of one branch of this house in “A Corner of Kent,” which I have here abbreviated.

They were first seated at Aldington in Kent, where Robert de Septvans, the husband of Emma, co-heir of William FitzHelte, was living before 1180. His son and namesake was twelve years old in 1185, and possessed some property in Essex, where we find an Isilia de Septvans—possibly the wife of Robert II.—a benefactress of St. John’s Abbey, Colchester, in the twelfth century. Three more Roberts succeeded him; the last, a knight of whom there are many notices in the parliamentary records, died in 1306, and lies buried at Chartham. “His often engraved sepulchral brass affords a fine specimen of the ailettes in fashion at that period, and displays on them, as well as on the surcoat, the winnowing fans, which were most probably at first seven in number for Sept-vans, but reduced, in compliance with a later practice, to three.”—Ibid. Then followed five Sir Williams; two of them Sheriffs of Kent. One of these, in 1366, petitioned for an inquisition probatio aetatis, having been “led away and counselled by Sir Nicholas de Loveyne of Penshurst and others to alienate his lands and tenements to them, he not being at that time of full age, as had been falsely represented.” It was in fact proved that the deluded lad was not even then more than nineteen. The elder line terminated in 1448 with his son, whose heiress married Sir William Fogg of Repton.

There were several other branches, variously derived from the parent stock. One ended with John Septvans of Ash, Esquire of the Body to Henry VI., in 1453; another, first called At Cheker from one of their manors, adopted the name of Harfleet, either again from a manor, or, as the story runs, for brave deeds done under Henry V. at the siege of Harfleur, called Harfleet by the English. The representatives of this name were numerous; but they have all died out or merged into obscurity; the estates at Ash passed away in the seventeenth century through Aphra Harfleet to the St. Legers of Doneraile; and their monuments in the church alone are left.

Aldington-Septvans and Milton-Septvans retain the name in Kent; the latter having been, according to Hasted, their principal seat in the county.

What is the history of the Von Siebenthals?