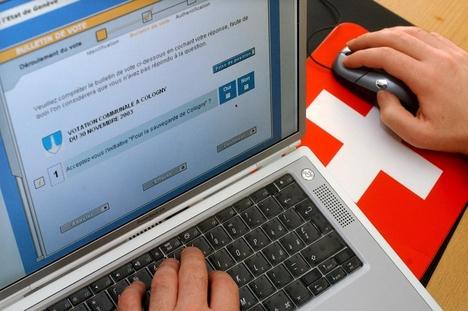 For more information about the dangers of electronic voting, see http://www.fipr.org/eDemocracy/index.html.

Postal voting used in the UK is already opening up avenues for fraud (which electronic voting will exacerbate).
That article also points out the fundamental fallacy underlying the supposed reason for electronic voting.
http://stallman.org/

Richard Matthew Stallman is a software developer and software freedom activist. In 1983 he announced the project to develop the GNU operating system, a Unix-like operating system meant to be entirely free software, and has been the project's leader ever since. With that announcement Stallman also launched the Free Software Movement. In October 1985 he started the Free Software Foundation.
The GNU/Linux system, which is a variant of GNU that also uses the kernel Linux developed by Linus Torvalds, are used in tens or hundreds of millions of computers, and are now preinstalled in computers available in retail stores. However, the distributors of these systems often disregard the ideas of freedom which make free software important.
That is why, since the mid-1990s, Stallman has spent most of his time in political advocacy for free software, and spreading the ethical ideas of the movement, as well as campaigning against both software patents and dangerous extension of copyright laws. Before that, Stallman developed a number of widely used software components of the GNU system, including the original Emacs, the GNU Compiler Collection, the GNU symbolic debugger (gdb), GNU Emacs, and various other programs for the GNU operating system.
Stallman pioneered the concept of copyleft, and is the main author of the GNU General Public License, the most widely used free software license.
Stallman gives speeches frequently about free software and related topics. Common speech titles include "The GNU Operating System and the Free Software movement", "The Dangers of Software Patents", and "Copyright and Community in the Age of the Computer Networks". A fourth common topic consists of explaining the changes in version 3 of the GNU General Public License, which was released in June 2007.
In 1999, Stallman called for development of a free on-line encyclopedia through the means of inviting the public to contribute articles.
After personal meetings, Stallman has obtained positive statements about free software from the then-President of India, Dr. A.P.J. Abdul Kalam, from French 2007 presidential candidate Ségolène Royal, and from the president of Ecuador Rafael Correa. In Venezuela, Stallman has promoted the adoption of free software in the state's oil company (PDVSA), in municipal government, and in the nation's military.
Stallman's writings on free software issues can be found in Free Software, Free Society (GNU Press, ISBN 1-882114-98-1). He has received the following awards:

Stallman graduated from Harvard in 1974 with a BA in physics. During his college years, he also worked as a staff hacker at the MIT Artificial Intelligence Lab, learning operating system development by doing it. He wrote the first extensible Emacs text editor there in 1975. He also developed the AI technique of dependency-directed backtracking, also known as truth maintenance. In January 1984 he resigned from MIT to start the GNU project.

(this biography was published in the first edition of "The Hacker's Dictionary".)
I was built at a laboratory in Manhattan around 1953, and moved to the MIT Artificial Intelligence Lab in 1971. My hobbies include affection, international folk dance, flying, cooking, physics, recorder, puns, science fiction fandom, and programming; I magically get paid for doing the last one. About a year ago i split up with the PDP-10 computer to which I was married for ten years. We still love each other, but the world is taking us in different directions. For the moment I still live in Cambridge, Massachusetts, among our old memories. "Richard Stallman" is just my mundane name; you can call me "rms".
(jpeg 2k) (jpeg 64k) There is a black-and-white photograph of me as a 5820K Encapsulated Postscript file, a 3762K JPEG file, and a 5815K TIFF file.
Here is a color photo in JPEG format.

A photo taken by Bill Ebbesen at the Danish Technical University on 2007/03/31. It is free to use and redistribute (placed in the public domain worldwide by the original copyright holder).

Photos from Copyright vs. Community event, Jan 31, 2008.
A photo from a recent interview.A photo of RMS with a large "aureole" by Roberto Brenlla.
An imaginative painting of Richard Stallman, by Jin Wicked.
Another drawing of me, by Banlu Kemiyatorn.

I like computers, music and butterflies—among other things.
Here I am wearing my "power tie".
Here I am struggling to open a bottle of water.
My application to an Ex Boyfriends List
What Republicans Believe.
I am also a saint, in the Church of Emacs–Saint IGNUcius. The Church of Emacs will soon be officially listed by at least one person as his religion for census purposes.
There are no godfathers in the Church of Emacs, since there are no gods, but you can be someone's editorfather.
Here are my funny poetry and song parodies and some puns.
Stallman Does Dallas: "I have to warn you that Texans have been known to have an adverse reaction to my personality . . . "
The Dalai Lama today announced the official release of Yellow Hat GNU/Linux.
I found A funny song about the Mickey Mouse Copyright Act (officially the Sonny Bono Copyright Act) which extended copyright retroactively by 20 years on works made as early as the 1920s.
If you are a geek and read Spanish, you will love Raulito el Friki, who said "Hello, world!" immediately after he was born. Here's an archive of this now-defunct comic strip.
My Puns in Spanish
Linguistic Swifties

On Hacking: In June 2000, while visiting Korea, I did a fun hack that clearly illustrates the original and true meaning of the word "hacker".
My Childhood Sweetheart

Other sites and organizations of interest: