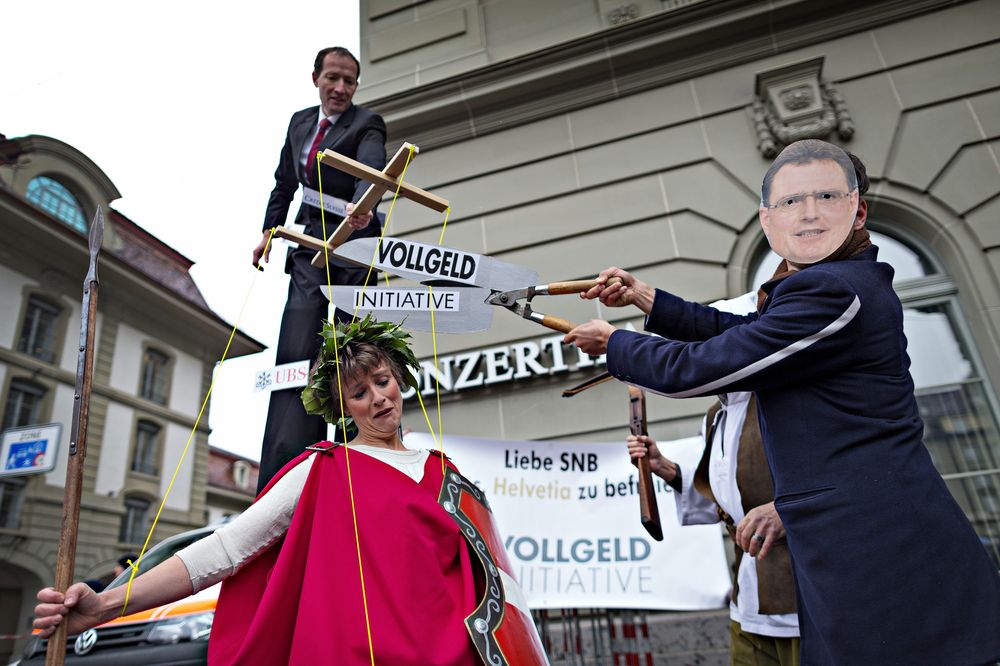 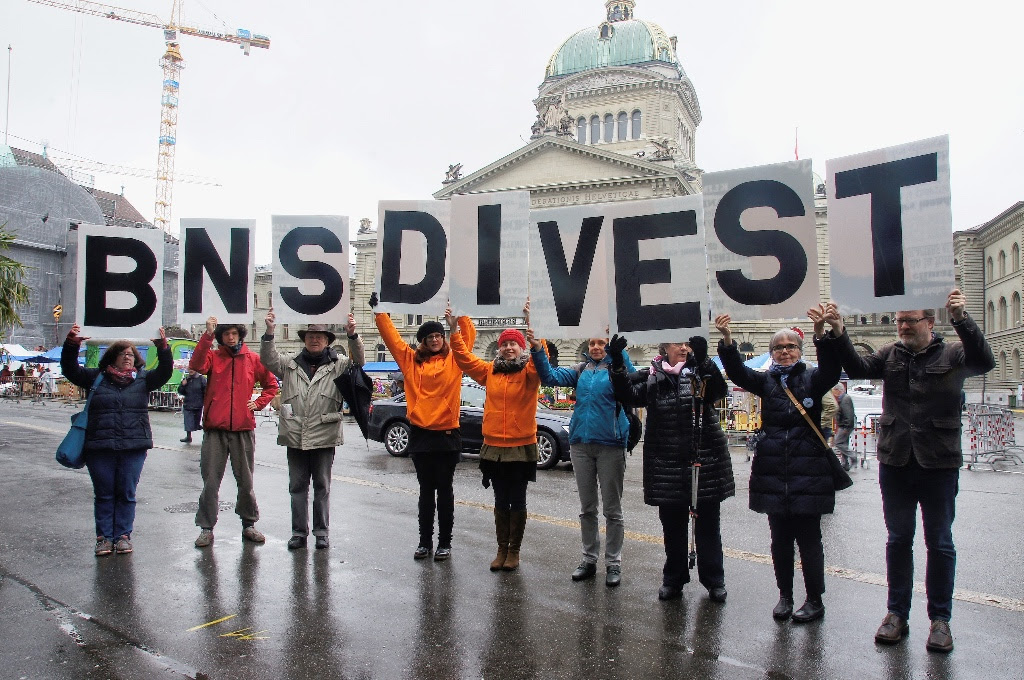 News at the main swiss TV

SNB Takes On Protesters, Croissant Critics at Annual Meeting by

Supporters of sovereign money passed out flyers before AGM

At its annual shareholder meeting on Friday, it faced criticism about investments in certain companies, its part in the global financial system and even the food on offer for attendees.

It wasn’t just within the hall in Bern that the SNB found itself in the spotlight. The meeting was also used as a focal point by a group who want to change the nature of the banking system itself and staged a protest in the center of the city.

At the event against fractional-reserve banking, Switzerland was represented as a puppet of banks, with one person dressed as SNB President Thomas Jordan cutting the strings controlling the puppet.

The initiative would “free Switzerland from dependency of large banks, and therefore the Swiss National Bank should examine” it in detail,” supporters said in a statement.

The Vollgeld — or “whole money” in German — measure seeks to put the central bank solely in charge of money supply and forbid commercial banks from granting loans that aren’t fully backed by deposits, effectively ending the way banking has been conducted for centuries. Proponents also argue it would prevent financial market bubbles.

The SNB and the government both oppose the measure.

“The system that we have works pretty well,” Jordan said. We don’t want an “experiment that we don’t know what the end result will be,” he said.
Investment Policy

Another popular initiative wants to restrict the SNB’s investments in weapons manufacturers, and a proponent addressed the meeting. Others also raised questions about its investments, which the SNB already limits on ethical grounds.

“We need to be careful that we don’t just go beyond these criteria to have certain preferences determining the entirety of the central bank’s investment policy,” Jordan said.

At times, speeches were met with applause and Vollgeld advocate Martin Alder was rewarded with calls of “bravo” from the crowd. SNB Bank Council President Jean Studer sought to enforce the allotted speaking times, but the event still ran for more than three hours.

The criticism didn’t stop with policy. There was also the investor who was concerned about the accuracy of his electronic voting device and also faulted officials for having too few croissants for the number of shareholders present.

Nevertheless, shareholders discharged the supervisory board for 2016 and approved the financial report for that year by a comfortable margin.

“Thank you very much for the many important questions,” Jordan said. “The shareholders are the guardians of the independence of the central bank.”

Before it’s here, it’s on the Bloomberg Terminal.

At its annual shareholder meeting on Friday, it faced criticism about investments in certain companies, its part in the global financial system and even the food on offer for attendees. It wasn’t just within the hall in Bern that the SNB found itself …

By John Revill
BERN, April 28 (Reuters) – Shareholders mounted an unsuccessful revolt against the Swiss National Bank on Friday for a higher payout from the central bank whose massive currency interventions helped it post a 24.5 billion Swiss franc ($24.64 billion) profit in 2016.
The Swiss National Bank, a rare central bank with listed shares, has seen a surge in interest from investors seeking alternative assets in a world of low interest rates.
Its stock has gained nearly 60 percent over the last year, but some shareholders are disgruntled with the payout that by law has been frozen at 15 francs for nearly a century.
A group of private shareholders proposed changing the bank’s rules to allow a higher payment, saying the bank’s foreign currency purchases had diluted the value of the Swiss franc.
“Our proposal aims to demonstrate the dilution of the purchasing power of the Swiss franc following the seven-fold increase in the SNB’s balance sheet since the financial crisis,” said shareholder Blaise Rossellat.
The Geneva businessman said the SNB was creating money out of thin air to buy foreign assets and not investing in Switzerland.
He said it was a perfect coincidence that SNB shares were quoted at 1,750 francs at the end of 2016, seven times more than its nominal value of 250 francs.
The SNB dividend is capped at 6 percent of its share capital of 25 million francs, allowing payment of 1.5 million francs.
For 2016 it paid 1.7 billion francs to the federal government and cantons. Remaining profit went into SNB reserves.
The rebel shareholders wanted a payout limit of 6 percent of the market value of the SNB’s shares, which could have potentially increased the dividend to 105 francs.
“We are being treated as third-class shareholders,” one supporter of the motion told fellow investors.
The motion was aimed not simply at a higher payout, but also to limit the central bank’s foreign currency inventions and foster a debate about money creation and the effect on the Swiss economy, Rossellat said.
“The seven-fold multiplication between the historical price of SNB shares and the current market price is a symptom that something is rotten in the monetary kingdom,” he said.
The SNB board opposed the motion, which was defeated with 87 percent of votes against a change. Individual shareholders’ voting rights are capped at 100 votes, skewing the results. Cantons and cantonal banks control the majority.
SNB shares fell 2.8 percent to 1,845 francs by 1050 GMT.
($1 = 0.9944 Swiss francs) (Reporting by John Revill, editing by David Evans)

We don’t want to experiment where we don’t know what the final outcome would be,” he told the SNB’s annual shareholder meeting in response to a question. A Swiss group pushing the initiative has collected enough signatures necessary to put the matter …

ZURICH—The Swiss National Bank said Thursday that it ran a 7.9 billion Swiss franc ($8 billion) profit during the first three months of 2017, underscoring the appeal to investors of one of the few central banks with listed shares. The report …

Negative interest rates and currency interventions have been the SNB’s main tools for two years as it tries to tame the franc amid demand by investors for the safe-haven currency whose strength makes life hard for Switzerland’s export-based economy.

The Swiss National Bank has additional firepower on interest rates and interventions if needed to take pressure off the franc, President Thomas Jordan said. “If necessary, we can lower the negative interest rate further or buy additional foreign …

ZURICH–Swiss National Bank Chairman Thomas Jordan on Friday left the door open to cutting interest rates more deeply into negative territory and intervening in markets to weaken the Swiss franc, as he said the central bank “continues to face major …

Jordan: Comments on the SNB’s monetary and investment policy

Against the backdrop of low inflation and underutilised production capacity in Switzerland, the Swiss National Bank (SNB) is maintaining its expansionary monetary policy. Global economic developments are largely positive, although the euro area has …

Investors rushed into regional and community bank stocks after the U.S. election, encouraged by higher interest rates and potential regulatory relief. Top executives and directors at banks used the rally for a different reason: to cash out. Are Traders …