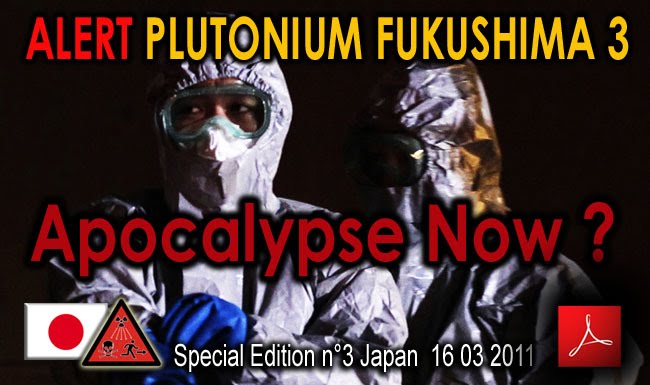 The Catholic Church in Japan (Catholic Bishops’ Conference of Japan) releases a message to demand the immediate closure of all the nuke power plants in Japan. I hope other Catholics to follow this path.

‘Tragedy’ of Fukushima proves need for other means of producing energy
ucanews.com reporter, Sendai
Japan
November 10, 2011
Catholic bishops in Japan said today they want an immediate end to nuclear power generation.
During a press conference at Motoderakoji Cathedral in Sendai City, they launched a document entitled End Nuclear Energy Now: Coming to terms with the tragic disaster of the Fukushima Daiichi accident.
Five bishops were present in person as representatives of the Catholic Bishops’ Conference of Japan (CBCJ). They addressed their message to “all those living in Japan.”
In 2001, the CBCJ issued a publication which touched on the same subject. They wrote of nuclear power plants: “In order to avoid tragedy, we must develop safe alternative means of producing energy.”
Today’s document points out that the “tragedy” referred to in the 2001 message “has truly come about in the form of the incident at Fukushima Daiichi.”
The bishops acknowledged that, if nuclear energy were to be abolished, Japan would be left with an energy deficit, and that the problem of CO2 would still need to be addressed. But they insisted that humans have a responsibility to protect “nature and all life, which are God’s creatures,” and to pass a safe environment on to future generations.
There are 54 nuclear power stations in Japan. According to the new document, every one of those “holds within itself the danger of another enormous accident like [Fukushima Daiichi].”
Japan has “a culture, national wisdom, and tradition of living in harmony with nature,” and its Shinto and Buddhist religions are also infused with a similar mentality. And “in Christianity, we also have the mentality of noble poverty.”
The bishops want their countrymen to change their lives fundamentally, if necessary: “The essential thing is to adapt our lifestyle, which is excessively dependent on nuclear energy; to turn that lifestyle around in its whole way of being.”
295 words

Denies media reports he wanted Church to stay away from action at site of plant
Leo Fernando, Chennai
India
November 11, 2011

Women protesters listening to organisers
A Catholic prelate today denied media reports that he had instructed his diocese officials to stay away from an ongoing protest against a nuclear plant.
“I am morally and spiritually with the protestors and support their cause,” said Bishop Yvon Ambroise of Tuticorin.
He was reacting to reports in two newspapers yesterday that said Tuticorin diocese had asked its priests and nuns to stay away from those protesting against the imminent opening of the new Koodankulam nuclear power plant.
The reports said anti-nuclear activists have relented in their opposition after discussions with government-appointed nuclear scientists.
People in three southern districts of Tamil Nadu state started the protest on September 11.
The US$3 billion plant, built with Russian technology, is scheduled to start operating in December. It is expected to produce 2000 MW of electricity.
Bishop Ambroise said he had asked his priests and nuns to support the protest. “But I have also instructed my people to allow the lay people to take leadership.”
He also dismissed an allegation that Church leaders have hijacked the struggle.
Related reports:
Fishermen call off anti-nuclear fast
Protesters take aim at nuclear plant
175 words