First one, a dividend for all

Switzerland
will hold a vote on whether to introduce a basic income for all since
conception, in a further sign of growing public activism over pay inequality
since the financial crisis.

A grassroots committee is
calling for all adults in Switzerland to receive an unconditional income of
$2,800 per month from the state, with the aim of providing a financial safety
net for the population.

These quantative easings are to be given to the
people, not for wars or bonuses for the happy fews…Swiss Open Society to a
real economical democracy, let’s distribute the incomes from more and more
automation, thanks to robots, computers and machines.

A new society,
animals are free, it’s our turn, let’s free human beings from the chains of
serfdom.

Automation will benefit to all. Let’s share the massive productivity, a
dividend for all swiss peoples, habitants of all the States of the Swiss
Confederation, a real economical democracy, thanks to robots, computers and
machines, animals are free, it’s our turn, let’s free human beings from the
chains of serfdom.

We, swiss, are all Kings, and the first duty of a
King is to control the money creation,

See the cross in the
picture, on our flag and buildings.


the golden cross, on top of our parliament in Bern 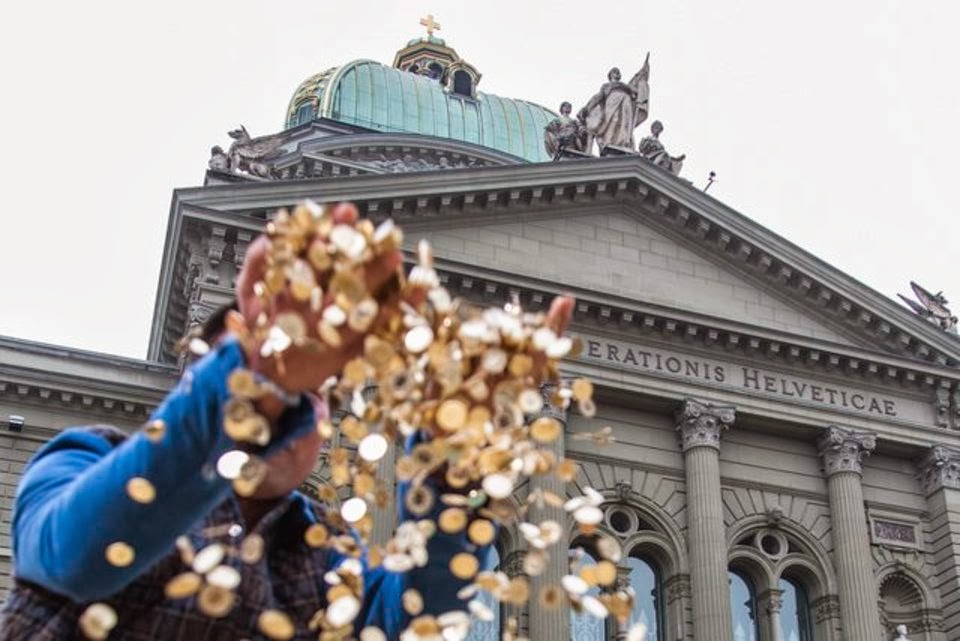 Second initiative to be launched this 3rd June.

Money creation can be given to all persons living in Switzerland.

Switzerland is politically unique in this regard as the Swiss Constitution
provides a political instrument known as
the Volksinitiative (Peoples’ Initiative) which enables Swiss
citizens to launch an initiative aimed at changing specific provisions within
the Swiss Constitution. To do so requires first of all the collection within
an 18 month period of 100’000 valid signatures in support of the initiative.
Should this hurdle be surmounted, the initiative would then be put to a
national vote.
Preparations for the spring launch are well under way, including the draft
proposed amendments to the Swiss Constitution. In a nut shell, the proposal
extends the Swiss Federation’s existing exclusive right to create coins and
notes, to also include deposits.  With the full power of new
money creation exclusively in the hands of the Swiss National Bank,
the commercial banks would no longer have the power to create money
through lending. The Swiss National Bank’s primary role becomes the management
of the money supply relative to the productive economy, while the decision
concerning how new money is introduced debt free into the economy would reside
with the government. As is evident from the foregoing, the MoMo monetary
reform initiative is essentially based on the monetary reform advocated by
PositiveMoney.
For those interested in following the developments of the campaign, or who
would like to understand the detailed provisions, including those relating to
the transition period,  please refer to the campaign
website.  The website is in German so language will present a
limitation for many of you. Nevertheless, we do encourage you to visit the
website and if you have specific questions, to leave a message in English.
Someone from the team who speaks English will get back to you. The biggest
challenge for the team at this stage of the campaign is to find the needed
help and financing for signature collection. The minimum amount of funding
required for a successful campaign is estimated to be 400’000 CHF or just over
270’000 GBP. Although, this is a non-UK initaitive, should the MoMo team
succeed in putting such a fundamental reform proposal to a national vote, this
would be a momentous achievement for the monetary reform movement in Europe
and across the globe.  All eyes would be fixed on Switzerland, because
success for this small but significant player in the financial arena would
inevitably have a ripple effect in other countries.

The main thing is to look for the Kingdom
of Christ and His justice: “But seek first the
Kingdom of God and His righteousness, and all these things will be given you
besides.” (Matthew 6:33.) This is really what we are doing here
with local exchange systems; we are dealing with justice, the justice of God.
Work for justice, and everything else will follow!

On the edge “Dominus providebit — God will provide”, the
year of the production and 13 stars, i.e. the Christ plus his 12
Apostles.

5 francs, 5 fingers with
the name of the Trinity spelled on each finger seen as a circle, 5 voyels not
writing but as a song, even a baby can sing those 5 voyels, your throat more
and more open, i e o u a
I E O U
A
I E sh O U A , shin means
humanity in God
A ll E L U I
A
LIOBA, with the A BB A,
meaning Daddy, God the
Father.
https://www.youtube.com/watch?v=3xJFuZD5CvA
https://www.youtube.com/watch?v=qtRPo-kknWg


… the 5-franc coin
that is currently in circulation in Switzerland. (See picture above.) On one side, one can see
the Swiss cross, which represents the Kingdom of Christ, and on the other
side, social justice is represented by William Tell, the Swiss national hero
and liberator of the poor and of the oppressed. On the edge, one can read
these Latin words: “Dominus
providebit — God will provide”, which specifically refers to the
verse of the Gospel of Matthew mentioned
above.

I lived in Geneva
1977. The music de la Fete de Vignerons was fantastic and the interpretation
of the Ranz des vaches absolutely stunning. I love it so much and it will stay
close to my heart until my last day. Bravo la Suisse!
Karel-Spiridon

YODEL, a
song to God.

Joshua fit the battle of Jericho