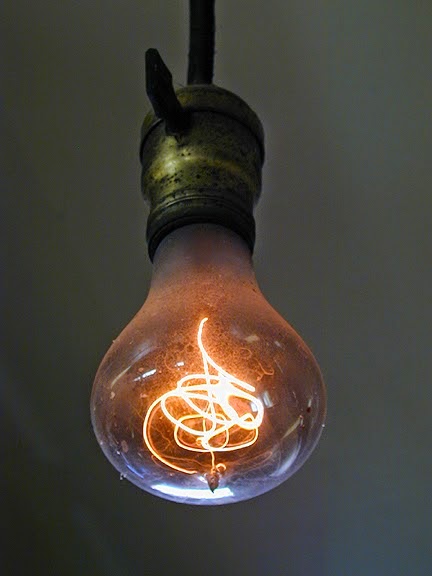 The world’s longest burning light bulb was installed in 1901 and has been glowing for over 110 years straight. It has a carbon filament that is eight times thicker than a contemporary bulb.

Technically, the bulb has been turned off twice in 110 years. Once when the fire house moved locations, and once when the generator that ran it broke down.
Another interesting tidbit is that the guy that runs the live feed website has had to replace the camera twice since starting the website.
Also, shortly after the popularization of the light bulb, companies that produced them formed an agreement to shorten the lifetime of the light bulbs they made so that consumers would in turn buy more of their product. They shortened the common light bulb’s life from 2500 hours to 1000 hours. This might be the origin of planned obsolescence. “The effects of this compulsive economic activity on the environment are tremendous. Thousands of deleterious intrusions on nature are justified on the grounds that they put income in people’s pockets. Shoddy quality and built-in obsolescence are winked at because they guarantee rapid replacement of goods and sustained economic ‘busy-ness’. Financial structures encourage companies to cut corners and employ inferior, polluting technology rather than up-to-date, clean productive methods. Production is tallied favourably in government statistics without regard to whether it degrades or debilitates people or is functional or ever actually fills consumer needs. Endemic misdirection of effort subverts ecological morality; the sense of humanity’s place in nature is weakened.
“To put the position somewhat differently, instances of environmental degradation are largely symptoms of the deeper problem of a persistent shortage of consumer buying power.
“Environmentalists routinely denounce exponential economic growth as folly. Unfortunately, without precise understanding of what makes such growth imperative, they cannot suggest anything very practical in the way of alternatives.
The false god of full employment
“Full employment, one of the silliest concepts ever developed, is of course bound up in the whole sorry mess… The purpose of economic activity is to make life more, not less, congenial. A lot of, if not most, employment – especially the make-work variety – is fundamentally pointless and degrading (…)
“Why is the environmentalists’ silence about the folly of the policy of full employment a significant failing? At least in part because keeping people employed is tremendously costly, and when it is done merely as a roundabout means of distributing incomes, it constitutes sheer waste. Just as many individuals find that much of the income they derive from work ends up being expended in allowing them merely to continue working, so an economy that strives to keep all citizens at work winds up applying vast quantities of resources to that end without net gains in productivity. “Office complexes must be built and maintained to house the “fully employed”; mountains of supplies must be manufactured for them to “work” with; systems for moving them to and from the workplace must be installed; great amounts of fuel must be extracted and refined and transported and burned to get them to and from work and keep them warm once they are there; and so on.
“The fixation, resulting from years of brainwashing on the subject by the media and object lessons in the form of economic depressions and recessions, that we have on the desirability of creating jobs has blinded us to the fact that deliberate pursuit of `full employment’ can lead only to inefficiency… Full employment suits dull functionaries, not creatures bearing the stamp of divinity. (…)
To correct the problem
“Really, the only way to deal with the problems of pollution and spoliation is to remove the incentive for abuse. The principal engine of economic waste is the emphasis on production as an end in itself to deal with an inherent defect in the system of income distribution. It follows that correction of this defect would take the pressure off people to build capital that is redundant and that nobody wants in itself. It would allow a rational and balanced assessment of our environmental situation and open the broadest possible range of options for contending with it.
“The first step towards economic and environmental regeneration is to increase the flow of income to consumers. Of course, by ‘income’ is meant real buying power – not recycled debt for which the people are already responsible in their roles as consumers and taxpayers. The banks create billions of dollars daily against the real wealth produced by the population, and the upshot is that the country is wallowing in debt. These same institutions could be instructed to create credit on a debt-free basis and, to equilibrate the flows of production costs and ability to liquidate them, distribute it in the form of dividends payable to all citizens.
“In other words, in a responsible and scientific manner, let us make ourselves financially rich. We cannot be richer financially than we are in real terms, but we can be as rich. Indeed, it would be idiotic to be less rich. Well, yes, this does not say much for the quality of the thinking we have applied to the situation to date, but it is not too late to improve it. (…)
“Against the wishes of virtually every conscious person, our beautiful earth is being intensitively ravaged and polluted, and, in a kind of Reichstag fire manoeuvre, power-hungry persons are using these environmental problems for self-serving political ends. When we trace the causes of the present situation to their source, we find a flawed financial system. We need not destroy the money system – indeed, to do so would be a grave error – but it is crucial that we reform it so it becomes the servant, not the master, of our aspirations.”
All those who care for the environment, and consequently for the future of mankind on earth, all those who want to “save the planet”, should therefore study and diffuse Social Credit, the only system that would put money at the service of the human person, and put an end to the waste of resources.
Alain Pilote