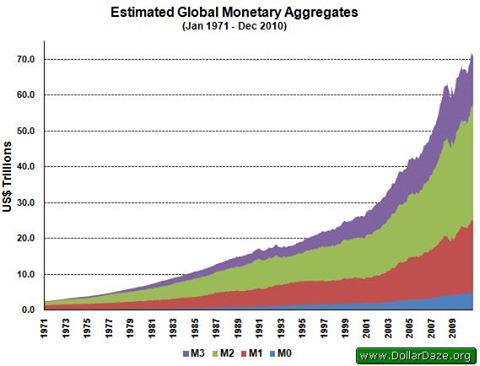 The biggest misdeed, money creation out of nothing, ex nihilo, out of thin air, diluting all our bank notes, a Ponzi Madoff scheme…
Robert Jenkins’ partial list of bank misdeeds – UPDATED 8 June 2016

This partial list was compiled by Robert Jenkins, formerly a member of the Bank of England’s Financial Policy Committee and now Adjunct Professor of Finance, London Business School and Senior Fellow at Better Markets, and first delivered at the Finance Watch conference “Confidence, ethics, and incentives in the financial sector” on 17 November 2015.

Manipulation of precious metals markets (gold/silver/platinum/palladium – Switzerland)
Manipulation / collusion of the US Treasury Market auction/client sales
Manipulation of energy markets
Short changing clients a second time in not paying settlements in full
Violations connected with emergency fund raisings
Falsifying customer data and records
Misleading shareholders ahead of RBS rights issue
Misleading shareholder information with respect to Lloyds takeover of HBOs
Conspiracy to force small businesses into bankruptcy to the benefit of the lender
Insertion of illegal rate floors in Spanish mortgage lending
Faking customer files to justify predatory foreclosure practices
Misleading profit and capital statements based on questionable accounting practices
Bribing (“Improper payments”) officials in connection with license applications in Saudi Arabia
Hiring sons and daughters of senior officials in return for favours
Fabricating complaint letters after the fact to justify dismissal of a whistle-blower who raised alarms over possible mis-selling of mutual funds.
“Mis-informing” (lying) to 4500 people over existence of dormant accounts
Use of “mirror trades” ($10 billions worth) to circumvent Russian related sanctions
Overcharging customers who are past due on their credit cards
Market rigging of Gilt trading
Hiding failed Loans in the commercial real estate portfolio in 2009 and 2010 whilst issuing new stock to repay government bail-out money
Non transparent and excess charges for FX transfers by major UK banks to small businesses in the UK
Manipulating shareholdings around dividend payment dates to trigger dishonestly acquired tax reimbursements
Manipulation of the Australian “bank bill swap rates”
Manipulation of the government sponsored bond market (supranational, sub-sovereign and government agency debt or “SSA market”)
Use of secret / undisclosed payments of circa $500mio connected with emergency capital funding
Knowingly acquiring “dirty debt” (a loan used as part of a multi-million pound embezzlement scheme) and using it to demand compensation from an African government
Conspiracy with borrower to falsify work estimates totalling $400 million of fraudulent accounts receivable
Facilitating fraudulent activity by customers via use of import advance payments
“Spoofing” in trading of US government bonds
Laundering the proceeds of Petrobras related corruption
Mis-selling of “lobo” loans to UK Local Councils
Fraud and criminal mismanagement in connection with account management for the former prime minister of Georgia
Forcing customers to switch from variable (“tracker”) mortgages into fixed rate mortgages – in a falling / low rate environment
Mis-selling expensive life insurance products to little old ladies in France
Facilitating African money laundering on a grand scale
Misleading Libor submissions with the aim of boosting confidence in the bank’s perceived credit worthiness
Conspiring to facilitate VAT evasion through manipulative carbon trading transactions
Knowingly misleading a major investor in a high stakes deal

Additions since 17 November 2015 are shown in italics.

Good to see that others agree that ‘abusive small business lending practices’ are an issue and need redress. We have started a campaign to get an APR for SME finance so that there is less opportunity for banks and others to hide costs from unsuspecting businesses. Please sign the petition at www.APR4SMEs.co.uk if you agree.

$8.4 billion in “direct loan relief.” At the time, “it was the largest predatory lending settlement in history, far exceeding the $484 million deal struck in 2002 with the Household Finance Corporation.”

Merrill Lynch settles securities fraud case with institutional investors in its common and preferred shares between Oct. 17, 2006 and Dec. 31, 2008. The plaintiffs alleged that the investment bank inflated the price of collateralized debt obligations (CDOs) in order to boost its own share price.

Bank of America finalizes settlement with SEC and several states over alleged misrepresentations that the bank made to customers about the safety and liquidity of auction-rate securities.

$4.5 billion in “restored liquidity” to the ARS market

Bank of America finalizes settlement with the SEC over its failure to “properly disclose employee bonuses and financial losses at Merrill Lynch before shareholders approved the merger of the companies in December 2008.”

Countrywide settles class action securities fraud claims made by institutional investors, including New York pension funds, alleging that the lender misled them about its health. The settlement was approved by judge in February of 2011.

Countrywide settles with the FTC over allegations that it overcharged customers who were struggling to hang onto their homes.

Countrywide settles class action lawsuit related to overcharging for mortgage insurance in violation of the Real Estate Settlement Procedures Act of 1974 (RESPA). Approved by a judge in July 2011.

Bank of America settles with 19 state attorneys general and four federal agencies over bid-rigging charges in the muni-bond market.

Deal with Freddie Mac to “end all claims, including future claims, related to mortgages sold through 2008 by Countrywide.”

Bank of America settles class action debit-card overdraft lawsuit. Here’s how one plaintiff described it: “The bank actively provides false or misleading balance information to these customers, including plaintiff, that in turn deceives these customers into making additional transactions that, in turn, will generate even more overdraft fees for the bank.” Approved by judge in Nov. 2011.

Bank of America settles class action lawsuit claiming that it “improperly increased the interest rate on delinquent or defaulted FIA, MBNA and Bank of America credit cards by calculating the rate increase starting at the beginning of the billing cycle in which the default or delinquency occurred.”

Countrywide settles with the U.S. Department of Justice over allegations that Countrywide “wrongfully foreclosed upon active duty servicemembers without first obtaining court orders.”

Countrywide reaches preliminary $8.5 billion settlement with The Bank of New York Mellon and 22 institutional investors (including Goldman Sachs and BlackRock) over toxic mortgage-backed securities issued. Approval of this deal is currently pending before a judge in New York.

Bank of America settlement with the City of San Francisco over allegations that the bank’s FIA Card Services used a rigged system to arbitrate credit card debt collection disputes.

Settlement of class action suit against Merrill Lynchbrought by investors alleging that the investment bank misled them about the risks associated with $16.5 billion of mortgage-backed securities in 18 offerings made between 2006 and 2007.

Settlement of U.S. Justice Department charges thatCountrywide carried out a “widespread pattern or practice of discrimination against qualified African-American and Hispanic borrowers.”

Bank of America settlement with federal and state regulators and agencies related to faulty foreclosure and servicing practices.

Settlement with Syncora Holdings regarding claims that the mortgage-bond insurer was duped into insuring Countrywide-issued mortgage-backed securities.

Bank of America settlement of class action lawsuit alleging that the bank “used deceptive marketing tactics to sign up and charge credit card customers for a useless credit-protection service.”

Bank of America settlement of class action lawsuit brought by B of A’s shareholders alleging that the bank provided “false and misleading statements about the health of” Merrill Lynch in the lead up to the acquisition. The deal was approved by a judge in April of 2013.

Settlement with Fannie Mae resolving claims that Bank of America (mostlyCountrywide) sold tens of billions of dollars’ worth of faulty mortgages to the government-sponsored entity.

On the same day as the Fannie Mae settlement,Bank of America joined with nine other lenders to resolve claims of foreclosure abuse related to the financial crisis. The aggregate settlement for all participants was $8.5 billion.

Settlement to resolve a class action lawsuit alleging thatBank of America violated the Real Estate Settlement Procedures Act by failing to respond to mortgagees’ requests for information relating to the servicing of their home loans.

Settlement to resolve allegations that Merrill Lynch failed to pay proper overtime to its client associates.

Bank of America settlement with the National Credit Union Administration to resolve claims stemming from sales of mortgage-backed securities to corporate credit unions that led them to fail.

Fined by the Financial Industry Regulatory Authority after an investigation found that Bank of America’s brokers steered retail investors toward a type of mutual fund that was riskier than what they were seeking.

Settlement to resolve a class action racial discrimination lawsuit alleging that Merrill Lynch segregated its workforce by, among other things, steering black brokers into clerical positions and reassigning their accounts to white workers.

Merrill Lynch settlement to resolve a class action gender discrimination lawsuit brought by female brokers alleging they were “paid less than men and deprived of handling their fair share of lucrative accounts.”

Bank of America fined by U.S. Department of Labor for hiring practices that kept qualified black job applicants from getting jobs.

Settlement to resolve claims that Bank of Americaemployees made harassing debt collection calls to customers’ cell phones in violation of the 1991 Telephone Consumer Protection Act.

Found liable for fraud over defective mortgages sold to Fannie Mae and Freddie Mac as a part of a shoddy home loan process atCountrywide known as the “Hustle.”

$850 million (the court has yet to rule on damages, but this is roughly what the government is seeking)

Countrywide settlement with Freddie Mac related to faulty mortgages sold to the government-sponsored entity from 2000 to 2009.

Merrill Lynch settlement with the Securities & Exchange Commission related to the structuring and sale of complex mortgage securities to institutional investors in 2006 and 2007.