JOIN US ON MONDAY: 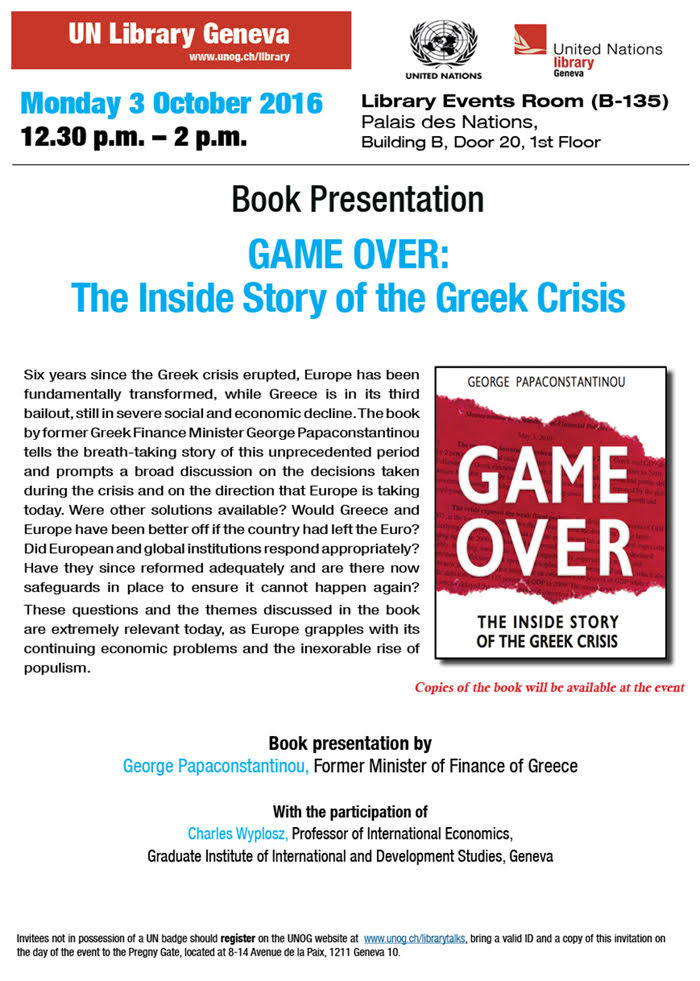 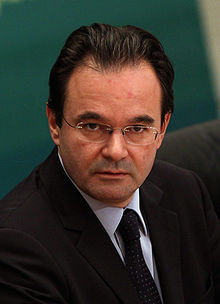 From Wikipedia, the free encyclopedia
Giorgos Papakonstantinou (Greek: Γιώργος Παπακωνσταντίνου), born October 30, 1961[1] in Athens, Greece, is a Greek economist and politician and former Minister for the Environment, Energy and Climate Change of Greece and former Minister for Finance. He is currently working in an advisory capacity in the private sector.

He graduated from the London School of Economics (LSE). He later obtained a Master of Arts in Economics from New York University and a PhD in Economics from LSE.
After his studies, he worked as a senior economist at the Organisation for Economic Co-operation and Development in Paris from 1988 to 1998.
In 1998, Papakonstantinou returned to Greece and was appointed an adviser to then-Prime Minister Costas Simitis on “information society” issues.
Two years later, he was appointed Special Secretary for the “Information Society” at the Ministry of Economy and Finance (2000–2002). Between 2002 and 2004 he served as a member of the Council of Economic Advisors of the Ministry of Economy and Finance, as a board member of OTE (Hellenic Telecommunication Organization), and as the Greek representative to the European Union’sEconomic Policy Committee (EPC). In 2003 he coordinated the “Lisbon Strategy” for economic and social reforms during the GreekPresidency of the EU.
Between 2004 and 2007, Papakonstantinou served as economic advisor to George Papandreou, the president of the Panhellenic Socialist Movement (PASOK). He was also a board member of the Institute for Strategic and Development Studies, PASOK’s think tank, from 2005 to 2008.
Between 2003 and 2007, Papakonstantinou also taught economics at Department of Management Science and Technology of theAthens University of Economics and Business and advised the European Commission on research and information society issues, participating in various international research projects.

In May 2005, Papakonstantinou was elected a member of the National Council of PASOK. In September 2007, he was elected member of the Hellenic Parliament to represent the district of Kozani,[2] and was subsequently appointed PASOK’s Press Spokesman in March 2008.
Papakonstantinou headed PASOK’s list of candidates for the European Parliament in the 2009 European elections and was electedMEP in June 2009. In October 2009 he was appointed Finance Minister in the government formed by Papandreou, the former prime minister, after the national elections.[3]
As Finance Minister, he revealed that the Greek deficit was much larger than what was reported by the previous government, and when Greece was shut out of international markets, he negotiated a €110bn loan agreement for Greece with the EU and the International Monetary Fund, together with a programme of severe fiscal consolidation and structural reforms. During his tenure, he overhauled the budget process, instituting a medium-term fiscal framework with expenditure monitoring and assessment mechanisms, and an independent statistical authority; embarked on tax reform, with legislative and organizational changes to combat tax evasion; implemented a wide-ranging program of structural reforms in product, service and financial markets; and designed a large-scale and wide-ranging privatization strategy. When he left office, the public deficit was more than 6 percentage points of GDP lower than upon his appointment, while Greece had recovered half the competitiveness lost since Eurozone entry and was named the OECD country with the fastest pace of structural reforms.
In June 2011, Prime Minister George Papandreou reshuffled the government and appointed him Minister of Environment, Energy and Climate Change, a post he kept in the government of Lucas Papademos until he handed over to a caretaker Minister in May 2012. In the field of environment, he accelerated the closure of uncontrolled landfills; revamped the waste management and recycling systems; helped implement a large number of water management projects co-funded by EU Structural Funds; advanced the completion of land and urban planning and of the national cadastre. In energy, he brought legislation to liberalize the energy market; oversaw a large increase of Greece’s renewable energy capacity and presented a road map for energy policies to 2050; spearheaded ambitious renewable energy projects, such as Project Helios for exporting solar energy; pursued Greek participation in international gas routes; and brought forward the exploration of Greece’s hydrocarbon potential.
He was one of a number of Papademos’ cabinet who failed to be re-elected in the May 6, 2012 General election that saw PASOK lose almost 120 seats in the house.
Following the elections, Papakonstantinou has faced a parliamentary investigation into the handling of the so-called Lagarde list, containing information on the deposits of roughly 2,000 Greek citizens at HSBC bank’s Geneva branch, which he asked for and received from French authorities in 2010. While Papakonstantinou asked the Greek tax authorities to investigate the list, they failed to do so. In late 2012, the Greek authorities alleged that the names of three of his relatives had been removed. Those allegations resulted in his expulsion from the PASOK political party,[4] He has consistently denied all charges and claims he is being made a scapegoat for the inaction of others on this issue as well as for the public’s need to punish politicians for the austerity policies in Greece.[5] In 2015, a Special Court convened for this case and composed of 13 judges drawn from the two highest Greek courts unanimously cleared him of the breach of faith charge, concluding that there had been no damage to the State from his actions. At the same time, with an 8 to 5 majority by the court, he received a suspended misdemeanour conviction for the tampering charge.[6]
In 2016 he published a book in which he told his story as finance minister of greece when the debt crisis unfolded.[7]

Papakonstantinou is married to travel writer Jacoline Vinke (nl). They have two sons, Nicolas and Stefanos.

George Papaconstantinou was the point man in the Greek economic and financial crisis. When he became Finance Minister in October 2009, he uncovered the true extent of Greece’s fiscal troubles, went on to participate in all the European discussions and efforts to create a support mechanism for Greece, and negotiated the 110 billion Euro loan agreement with the EU and the IMF, together with the package of fiscal, structural and financial policies which went along with the largest loan ever received by a country.

During his tenure as Finance Minister in this critical period for Greece and Europe, he overhauled the budget process, put in place expenditure monitoring and assessment mechanisms, and created an independent statistical authority; embarked on tax reform, with legislative and organizational changes to combat tax evasion; implemented wide-ranging structural reforms in product, service and financial markets; and designed a large-scale privatization program. When he left office, the public deficit was 6 percentage points of GDP lower, Greece had recovered half the competitiveness lost since Eurozone entry and was the fastest reforming OECD country – a huge adjustment effort with however an equally large economic and social cost. In the process, he also became the perfect scapegoat for all the troubles of the country, ending up in a trial by a special court for his handling of the so-called Lagarde list – a gruelling personal ordeal which he powerfully describes in the book. 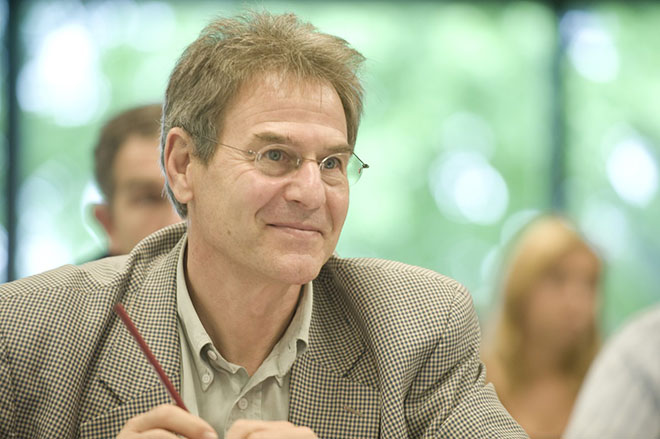 Charles Wyplosz is Professor of International Economics at the Graduate Institute and Director of theInternational Center of Monetary and Banking Studies.
Comments on Brexit
Recent writings:
The six flaws of the Eurozone, Economic Policy, 2016.
Minimal Conditions for the Survival of the Euro (with Barry Eichengreen), February 2016.
An entertaining fiction on the Eurozone crisis (with Barry Eichengreen), February 2016.
The Eurozone Crisis: A Near-Perfect Case of Mismanagement, November  2014.
The Centralization-Decentralization Issue, European Economic Papers, DP 14, September 2014.
PADRE 2.0, update of PADRE (below), May 2014.
PADRE: Politically Acceptable Debt Restructuring in the Eurozone, January 2014.

George was born in Athens in 1961, and studied economics in the UK and the US. After obtaining a Ph.D from the London School of Economics, he went on to work for 10 years as an international civil servant at the OECD in Paris. In 1997, he returned to Greece to serve in a policy advisory capacity for the Greek government under Prime Minister Kostas Simitis. He ran for parliament for the first time in 2000, was elected in 2007, became party spokesman, and in 2009 headed the PASOK list for the June European Parliament elections. He resigned as an MEP a few months after being elected, upon being appointed Finance Minister in the government formed by George Papandreou following the October 2009 elections.